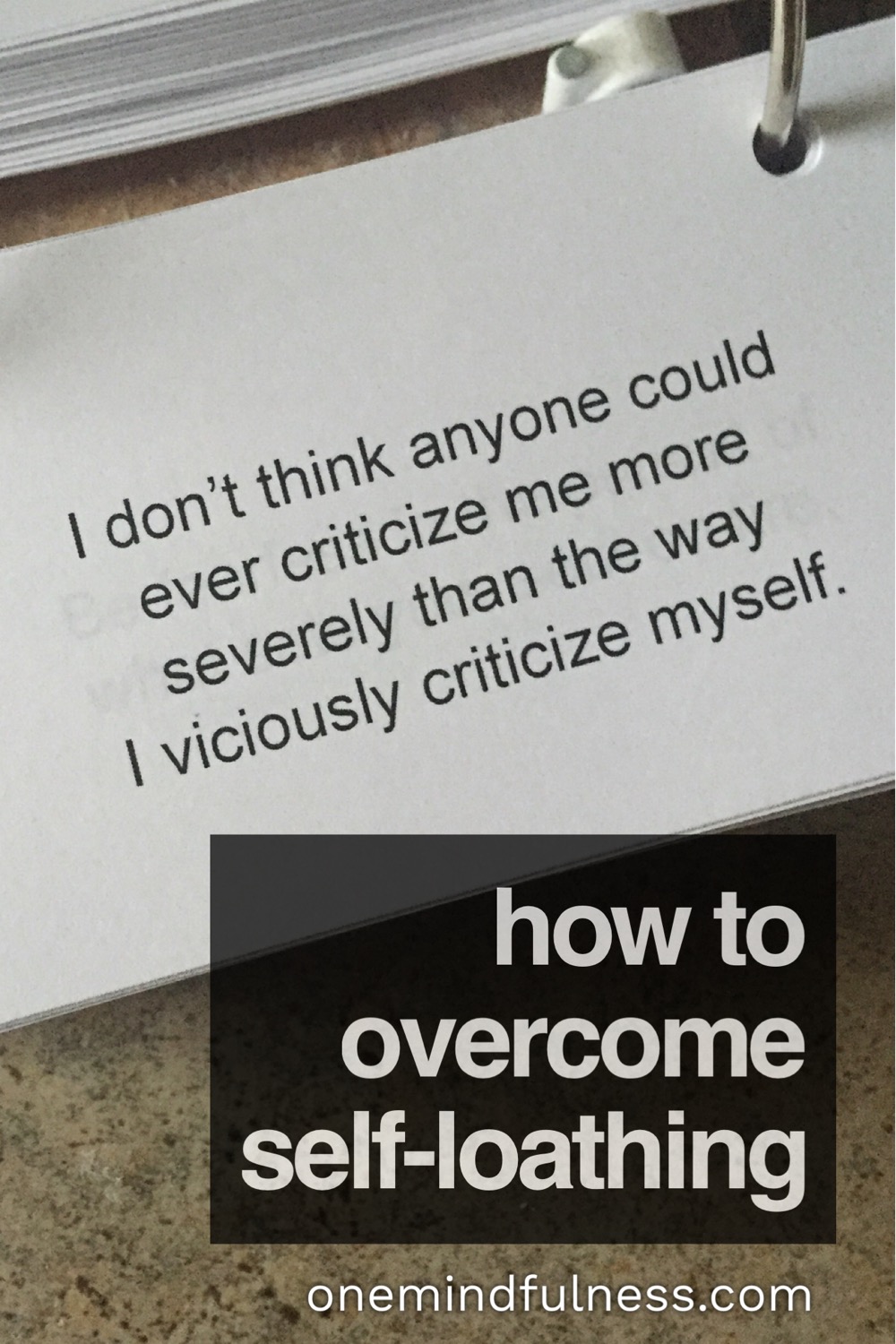 Stop the vicious criticism. When self-loathing rears its ugly head, we have the choice to notice it in the moment, interrupt it and choose a different course.

Every day our household wakes up to a flip calendar on the bathroom counter which challenges our way of thinking, and offers inspiration, insight, wisdom and sometimes ridiculous yet thought-provoking humour.

I ponder the calendar’s message and carry it with me through each day. Today’s daily inspiration, touching on self-loathing, hit me straight between the eyes and deep into my soul more than usual:

“I don’t think anyone could ever criticize me more severely than the way I viciously criticize myself.”

It’s that word – vicious. It gets me. Grabs me deep in my gut and churns.

The truth is, I have done more than just criticize myself. I have perpetrated vicious, brutal attacks on myself which, if done by anyone else, would be considered abusive at best, criminal at worst.

Outwardly, it reveals itself as calling myself names when I make a mistake, berating myself for being less than perfect.

Sometimes it is apparent in my silence when, for my health and well-being, I need to speak up.

Over the years it has fuelled addictive behaviours, starving myself or overeating, depression and anxiety, staying in relationship with others who I allow to attack me the way I do myself.

I’ve seen it drive myself and others to self-harm, acting out in rages, and so many other destructive behaviours.

All that sounds bad enough, but inwardly it has been a gazillion times worse. The internal dialogue that goes on in my head has been fed by a deeply-seated belief that I am, at the core, completely and essentially useless as a human being. Profound, heavy shame.

Why do I criticize myself so badly?

There are a whole bunch of reasons why I’ve criticized myself.

Maybe it’s that I never learned that I could love myself, or even should.

Maybe it’s from the religion to which I was exposed as a kid.

Maybe it’s the things that happened to me over the years.

Maybe it’s the choices I’ve made along the way.

Maybe it’s the media’s influence on my self-perception.

Maybe it’s all of that and more.

There was a time when it was important to dig around in the depths of my being and learn why I feel the way I feel and do the things I do. I found it necessary to seek professional help and group support for the level of inner turmoil with which I lived every single day. I needed to pick apart every thought process, every motive, every belief about myself. I needed to understand myself.

But understanding doesn’t change anything. It’s an important and critical step in the process, but it’s not the end of it.

How do I overcome self-loathing?

What’s important to me is what I’m choosing going forward. The past is the past and it cannot be changed. The only power I have to heal is through moving forward in my life differently. Stop criticizing myself all the time. It’s about making conscious choices, then acting purposefully instead of reacting.

Today, though I still sometimes feel the wrath of some of those deeply ingrained, intrinsic teachings, I no longer choose to be a slave to them. We as human beings have great capacity to learn stuff. We are learning, changing and growing every single moment. What I’ve learned to do is make the change conscious.

There are two choices I can make which create immediate change in my life: choosing my actions by consciously acting instead of reacting; and choosing my perspective and attitude by choosing to see myself with compassion instead of resentment and blame. Either way, I have the choice. Always.

Self-loathing is a hard habit to break. But it’s just a habit and, like any other habit, with effort and support can be changed into something stronger and more viable. Healthy. Powerful. Any one of us can choose self-compassion over self-loathing at any time.

How can mindfulness help self-loathing?

I often like to quote Wayne Dyer when he said that real change doesn’t happen by working on issues nor attacking harmful beliefs and behaviours. Focusing on a problem won’t help to change it. Dyer said that, when we’re entering a dark room, in order to see we don’t try to remove the darkness first – we simply bring in the light.

It makes so much sense. We don’t try to take the darkness out of the room first, we simply bring in the light.

So, when self-loathing rears its ugly head, my response now is to pause and use the mindfulness skills I’ve learned over time to notice it, interrupt it, and choose differently.

It’s about a simple shift in perspective. A simple choice to lighten up on myself. Cut myself some slack.

I did not choose to believe the things I was taught about myself, especially as a child in the most formative years. But I sure can choose what I will believe and how I will act from this point forward.

If you’re battling with your own shame and vicious self-criticism, you’re not alone. And you’re not hopeless. In fact, it’s the opposite. There is a boatload of hope in looking at things from a completely different perspective.

We always have choices in attitude and action. That’s the thing about mindfulness. It opens the door to taking responsibility for ourselves with the grace of an adult, not the petulance of a child.

I take some deep, conscious breaths, and begin bringing in the light.

THE CONVERSATION: Let's Talk About How to Overcome Self-Loathing

The ideas on this site may touch something inside that makes you go, "Aha! Yes!" Some may irritate you because they don't apply or you don't agree.

Both are equally valuable.